The students flew out on Tuesday 5th February with their teacher Ms Guinan. The first day they went shopping in the Florida Mall and then travelled to Titusville which is close to The Kennedy Space Centre.

The first of the challenges took place on Thursday morning. Alan and Rory represented the team in the Landing Challenge. First up was Rory. He had to land the shuttle safely on the runway while Alan acted as Mission Control and called out his altitude and speed as he approached the runway. For the second part of the challenge they had to reverse roles but this time there was the extra challenge of a blind landing. Most of the screen was obstructed to simulate a bird hitting the windshield and losing visuals. Alan had to land the shuttle blind while Rory talked him through the directions and also informed him of his speed and altitude. They showed great teamwork and both students landed safely on the runway.

Next up was the Engineering Challenge. All students participated in this section. They were divided into two groups, one in Mission Control and the second in Skylab. This was a very practical challenge and good communication was vital. First they had to establish communication to each other and then they had to build a circuit and complete a number of worksheets. This was a difficult challenge but they all worked hard throughout.

On Friday morning they had the Lab Challenge. The question asked them to look at an aspect of weather that could use an improvement and develop an experiment to improve the aspect. The students decided to look at rain and flooding and devised a system that would prevent flooding and reduce insurance costs and flood damage. They made an excellent presentation including a demonstration of the pervious concrete they used in their system.

The last challenge was the Simulator Challenge. For this challenge they were again split into two teams, three in the shuttle and three in mission control. In the shuttle was Commander Abdullah Butt, Pilot Thomas McAuliffe and Flight Engineer Leanne Mallen. They had to launch the shuttle, orbit, de-orbit and return back to Earth and land on the runway. In Mission Control were Rory Egan and Alan Harte and Flight Director Katie Lawlor. Communication between the Shuttle and Mission Control was vital throughout. They found this to be the most fun as it was in a simulator and gave a realistic impression of what it would be like in a real shuttle.

The semi-finals and finals were held on Saturday and the event culminated in the awards ceremony that evening. Unfortunately Oaklands did not place in the top three in any of the events but they were presented with a trophy for Highest Scoring Guest team. The overall winners were Florida State University Schools.

It was a super experience and they made great memories and met a lot of students and friends from the other competing schools. It was a great learning experience and very practical so students could see STEM subjects in action in real life situations. They drew on Maths, Physics, Chemistry, Biology and Geography throughout the competition. On Sunday they had a fantastic day in Universal Studios and got to ride all the rollercoasters and visit Hogwarts and Hogsmeade.

This was a once in a lifetime experience for all the students involved. They had a fantastic time and really enjoyed participating in the challenges. They also had some very famous supporters following the updates on Twitter. Dr Norah Patten followed all their adventures closely and is going to Skype them after the midterm break. Dr Niamh Shaw also followed their adventures and might even visit the school later in the year. It was amazing to have these inspirational ladies wishing them well throughout the competition.

The whole trip wouldn’t have been possible without the support of our sponsors. Thank you to Bord na Mona who came on board as our main sponsor. Thank you also to Siemens Gamesa, Collen Construction, TK Building Services, Polar Ice, Gemfler, Kaideen & Co, O’Grady Crane Hire and Transport Ltd, the Harte Family and Café India. Thank you all, your support was really appreciated.

Thanks also to Peter Carafano and the Board of the Student Astronaut Challenge for the invitation to participate and for covering our entry fees, hotel in Titusville, transport and tickets to Universal Studios. It was an experience of a lifetime. 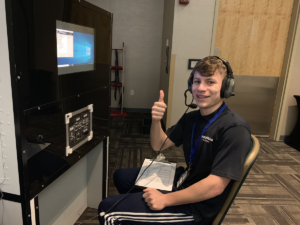